If I were to ask someone to pick an antonym for war, chances are, their first choice of words would be peace or pacifism. But there is an argument to be made that the true antithesis of aggression is creativity. War tears down, separates and tramples, but creativity unleashes the strength to build anew.

Creativity is the voice inside us that tells us to rebel, to be original, to produce and to design. It can be applied to anything from science to political strategies, and without it, nothing new could be invented. Creativity and innovation are the most vital resource that humanity has, and they’re something innately within us that can’t be taken away.

As I write these words, the war in Ukraine has been going on for over three months. The Ukrainian people didn’t take long to mobilize and start volunteering, gathering donations, and signing up to go to the frontline – even Ukrainian expats in other countries moved back home to add their contribution to the cause. Artists and creators were no exception.

In the 1990s, psychologists Richard Tedeschi and Lawrence Calhoun coined the term “post-traumatic growth.” The term referred to the anecdotal evidence of artists and creators coming  up with better and more innovative work after considerable trauma and life changes.

Although needlessly romanticized, the image of a “depressed artist” has been popularized for a reason – psychology provides concrete proof that creativity arises in times of conflict. Clinical psychologist Marie Forgeard dedicated her life to this exact topic: according to her research, using artistic expressions to deal with trauma leads to increased creativity and a plethora of new ideas.

Sudden change is often the needed shift in perspective to help creators produce their best work. Pain isn’t necessary for creativity, but it does force us to focus and reevaluate our priorities and see things from a new perspective. Artists and writers often release their best work while in a time of crisis – an unexpected event disrupts the artist’s set routine, which in effect causes him or her to redesign their routine and habits.

Musicians like David Bowie have taken advantage of this phenomenon by setting impossible and unexpected tasks for themselves on purpose in order to flex their creative muscles. Such exercises resulted in the revered Berlin albums, for instance.

History of Art in Times of War

Going back to prehistoric times, the first human cave drawings ever uncovered depict individuals and tribes waging war with each other. Conflict and violence have served as a source of inspiration since the dawn of civilization.

In the millennia that have passed, this collection of war depictions has seen considerable growth. Writers such as Kurt Vonnegut, Ernest Hemingway and Erich Maria Remarque have written novels depicting their own experiences of war and trauma, and artists like Thomas Lea and Vasily Vereschagin horrified viewers with their illustrations of the violence and death that come with warring conflicts. 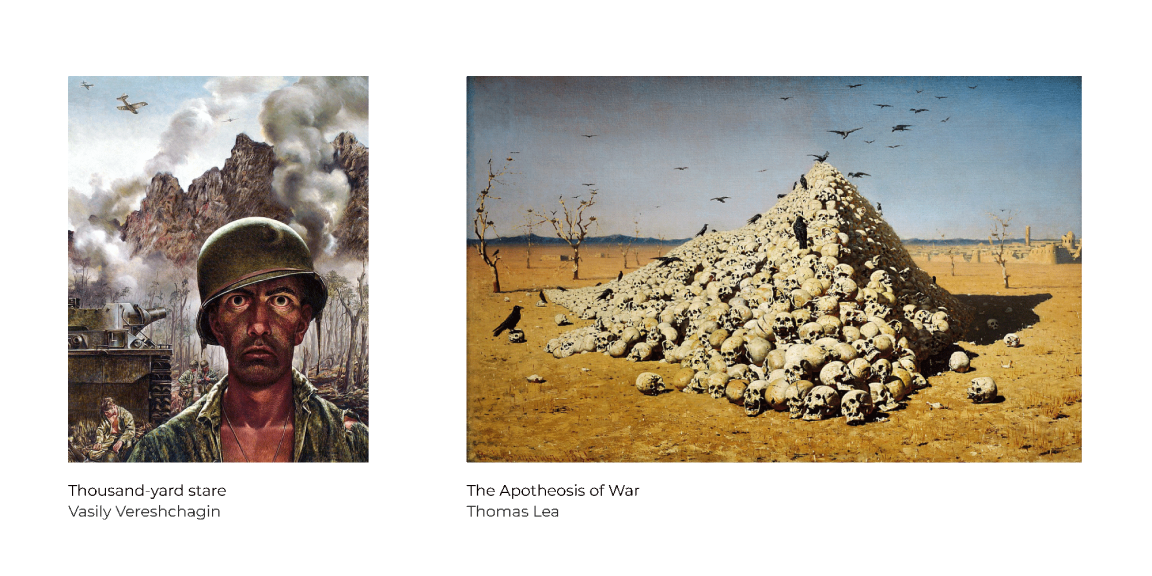 The Sound of War

At times, war inspired musical masterpieces. Beethoven famously wrote a symphony in honor of Napoleon before feeling disillusioned by all the war and violence in Europe and renaming the piece into the ‘Heroic Symphony’ – in honor of the defenders.

Years later, the first and the second World Wars changed the course of musical evolution. Composers like Edward Elgar and Maurice Ravel rallied their fellow countrymen with patriotic melodies and cheerful songs of victory with images of what is to come.

Reality, however, hardly compared to art. Music in the post-war years was marred by the tragic, mourning sounds of Vaughan William’s Pastoral Symphony, Holst’s The Planets, and many others that haunted listeners with memories of the innocence lost and the loved ones perished.

Camera as the Silent Witness – The Birth of Photojournalism

As photography and videography were invented, photojournalism became a prime source of war news. War photography shocked the world with the realistic, raw and violent imagery it portrayed. Gerda Taro, one of the inventors of military photojournalism, was killed in Spain during WW1, while Robert Capa, a contemporary of hers, continued his work until his untimely death in 1954 in the Indochina conflicts. Together, they have made hundreds of photographs of the atrocities of war. 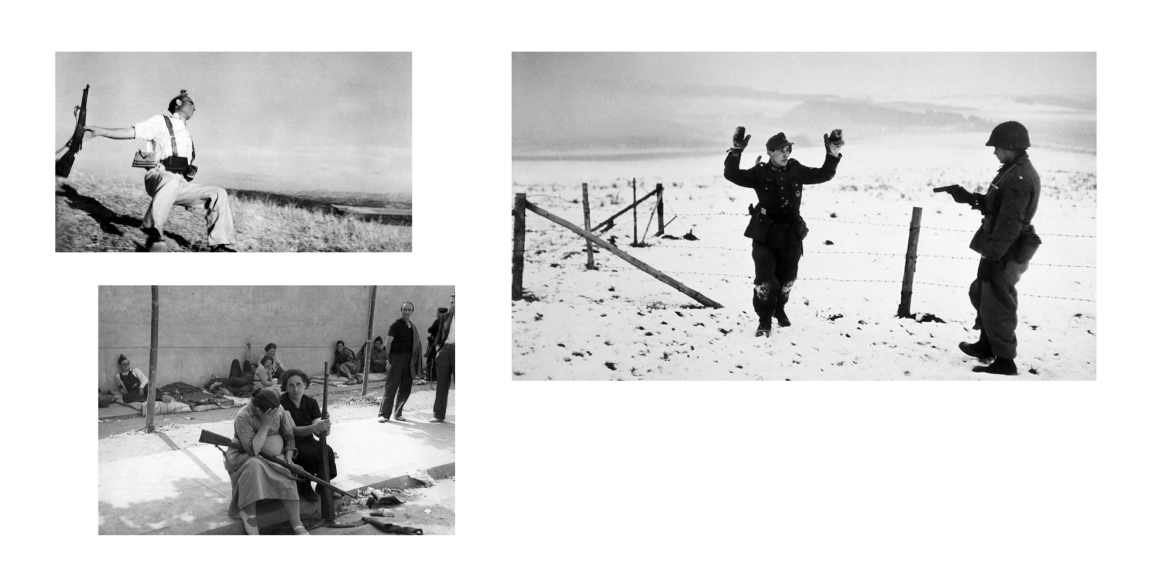 In the current Russia-Ukraine war, a number of Ukrainian photographers stepped up to contribute their share. Photojournalists such as Evgeniy Maloletka and Oksana Parafeniuk got world famous with their shocking depictions of atrocities by the Russian forces in Ukraine.

From Marketing to Military Strategies

And as a marketing agency, we at SAPHIRA can not forget about the power of advertising and branding in a time of war. War and propaganda go hand in hand; World War I and II saw a barrage of motivational posters, slogans, songs and poems that still live in people’s minds today and continue to serve as a source of inspiration and pride. In times of sorrow and defeat, these campaigns reminded people of their resilience, strength and of the better times ahead. 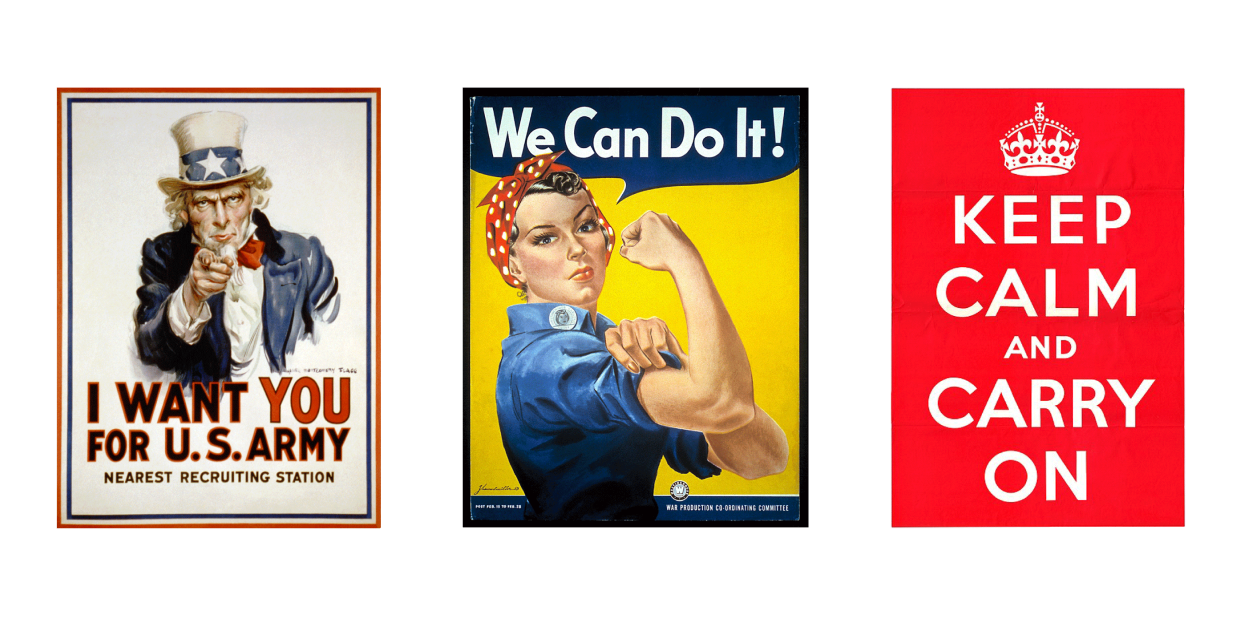 Curiously, many of these pieces of art came back to the public’s consciousness years later. Rosy the Riveter became a symbol of feminism, equality and the strength to persevere through tough times. And the British WWII propaganda poster “Keep Calm and Carry On” saw its renaissance in the 2000s, as teenagers from all over the world plastered their walls with their own copies of this symbol of stoicism.

In the current Russian-Ukrainian war, marketing and advertising specialists have not sat idle either. Activists staged protests, peaceful demonstrations, and performances. In Lviv, 109 empty baby strollers were left in neat rows as part of a display organized by Svitlana Blinova, symbolizing the innocent children who have perished in the conflict.

One of the more jarring demonstrations was organized by volunteers to commemorate the first month of the invasion. A United Nations report stated that within just the first four weeks of the war, over 1000 civilians were killed. This is the official number, and the reality was likely much harsher. In March of 2022, a month after the conflict began, the Ukrainian firms Fedoriv and the Gres Todorchik PR agencies organized demonstrators from all over Europe to stage a lie-down protest to symbolize the innocent lives lost. Participants vowed to continue their demonstrations until freedom and independence of the state will be restored.

Deploying Art Against the War in Ukraine

Art serves as a powerful tool in coping with the unjust pain of war. It helps unleash pent-up emotions, worries and anxieties. Art is a catalyst for releasing mental anguish and unleashing our fears – in many diverse, expressive, haunting, emotional, or apathetic ways. 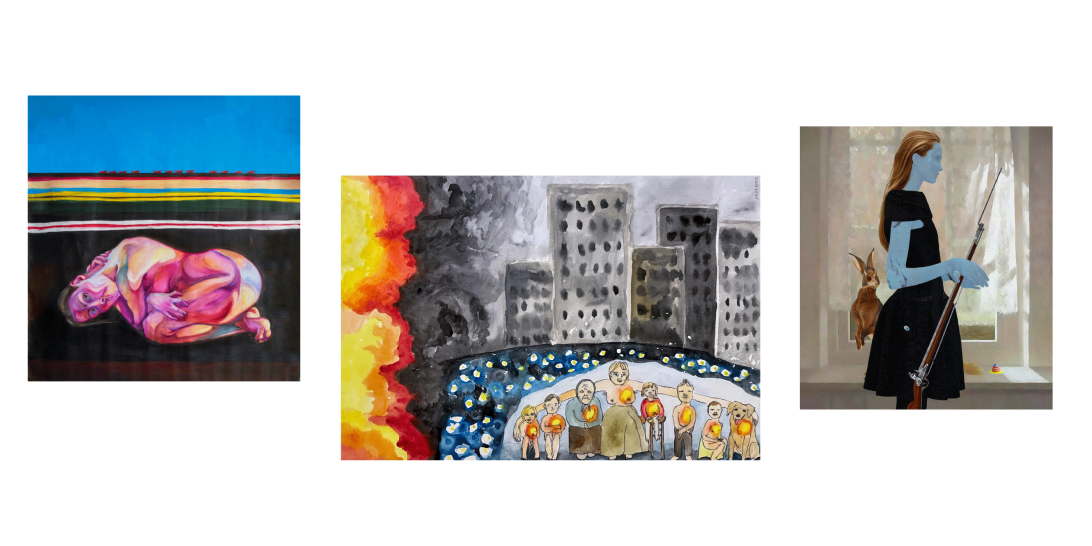 
Creativity also unites: whether it’s music, writing, or performance art, artists cling to what they know best. And in a time of fear, death, and worry, they implement their best-known weapon to unite others. In the modern times of fast internet and widespread access to mobile devices, this means that even during war - whether you’re fleeing from danger, sheltering from bombs, or are safe in your own home - you can create and spread your art with others.

From musicians to painters, Ukrainian creators have united to create art that consoled, distracted and brought people together. Many have switched to English to reach an international audience. Included among them is a young writer from Kyiv, Asia Bazdyrieva, who has been depicting her experience of the war in stream-of-consciousness entries (Meduzalove).


Visual artists have done their own share to depict the horrors of the war and to expose the war crimes and atrocities being committed by the Russian forces. 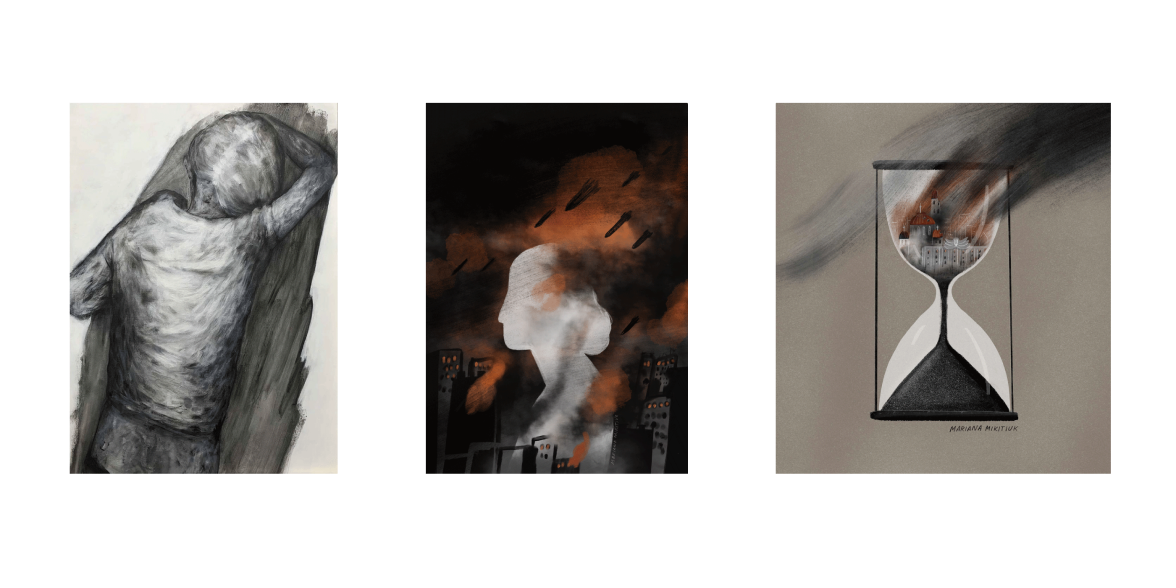 In the music world, Ukrainian musicians have created the Ukrainian Freedom Orchestra to rally people in support of Ukraine across the US and Europe.

One of its members, Marko Komonko, said, “When you live through all of this, you look at music differently, through different lenses. It takes my mind off the war. It allows people to keep living.”
Just a month later, Ukraine’s Eurovision entry won over listeners’ hearts and became the 2022 winning song. Combining traditional folk elements with rap, the song was originally written in honor of the frontman Oleh Psiuk’s mother but came to have a new meaning in the time of conflict. The band later dedicated the song to all Ukrainian mothers.

Other musicians have continued to write and record songs, with their international colleagues joining in in support. From around the world, creators and artists lent their voices to the cause.


Creativity is a term that is often misunderstood. You don’t need to be a professional painter or a renowned musician to express yourself creatively. Creativity is a show of human ingenuity, something that is inherent in us as a species, an expression of our will: the human desire to strive, to fight, to survive, to explore – to live fully.

Creativity is what allows us to evolve, adapt and thrive – and in the 21st century, even as war, disease and natural disasters rampage the world as we know it, humans continue to fight for independence, for freedom, for a full and dignified life. Whether we use our ingenuity to come up with fighting tactics against the invader forces or create hauntingly beautiful art that brings us all together in a time of crisis, the world has never been more creative than today.


Article by Baska Ganbaatar
Baska Ganbaatar is a Copywriter at SAPHIRA. With a background in Biochemical Engineering, Baska spent years as a researcher at various tech startups before pursuing her interests in linguistics and writing. She moved to Ukraine from Germany in 2020 and joined SAPHIRA as part of the Creative team.

The 5 Love Languages of Brands 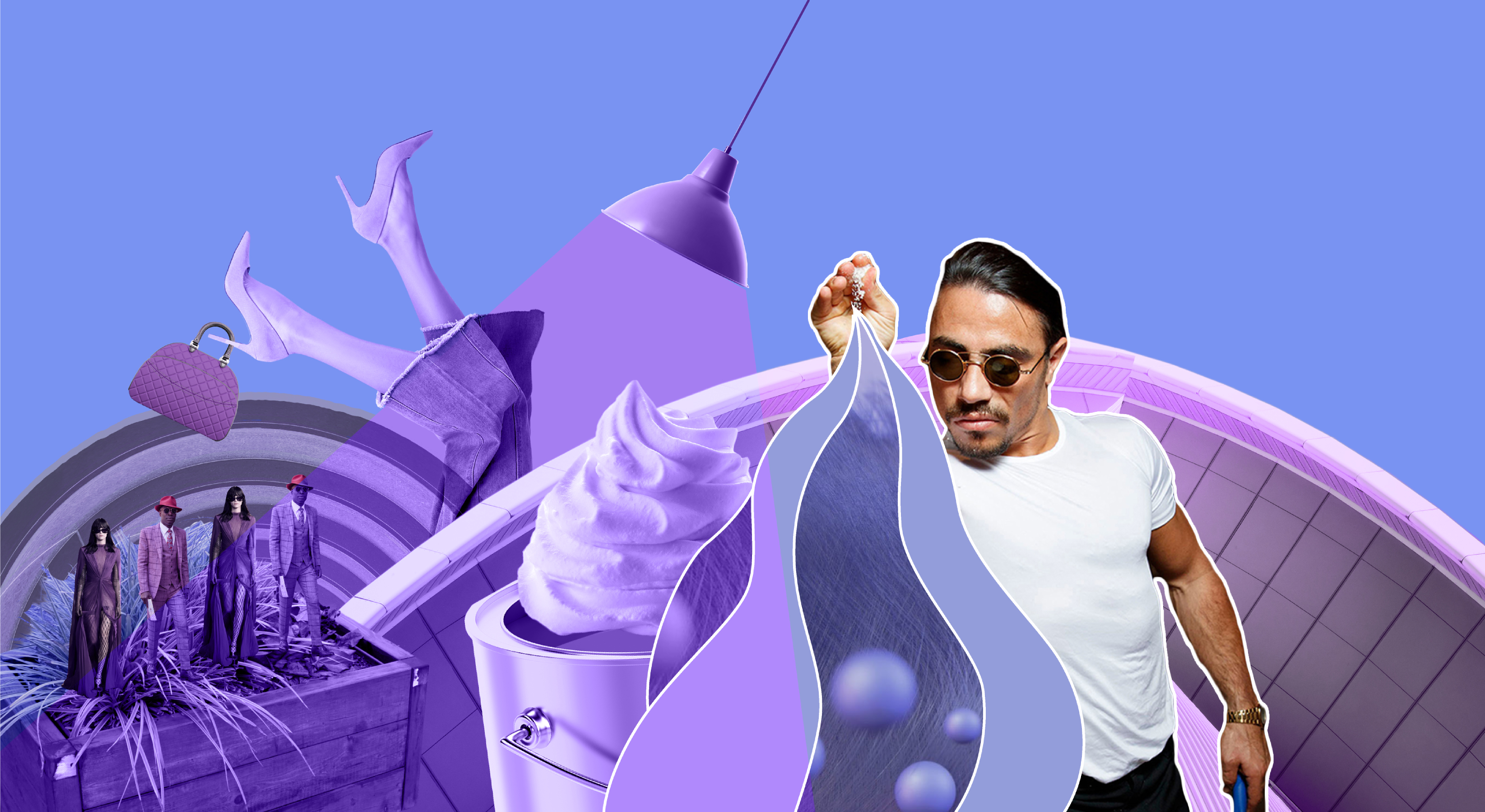 Why give a crap about Pantone Color of the Year? 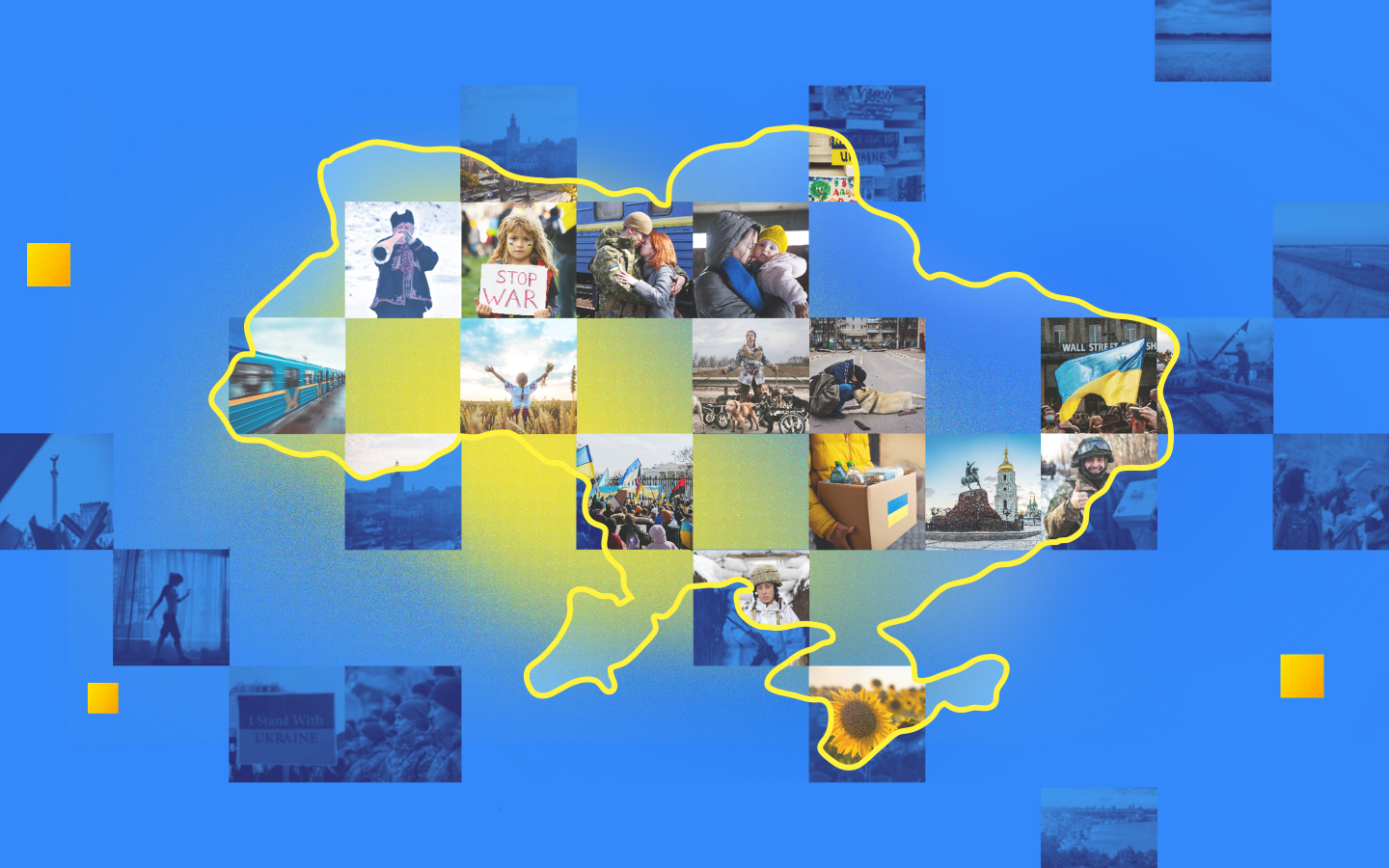 SMBs: hidden advantages and what to watch out for